Welcome!  It's that time of the month, time for Reverse Confetti's Countdown to Confetti!  This is an extra special release because Reverse Confetti is introducing 4 brand new product lines to their store!  That's right, Reverse Confetti will now carry their own line of cardstock, dye ink, 6x6 patterned paper pads, and stencils!  Isn't that exciting?  I know that you're going to LOVE these new products as much as I do, the quality is top notch!  Let's get started, shall we? 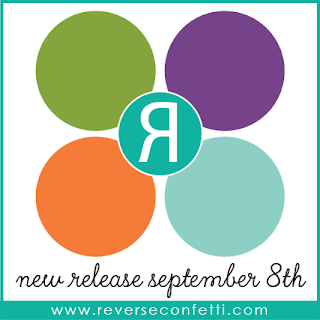 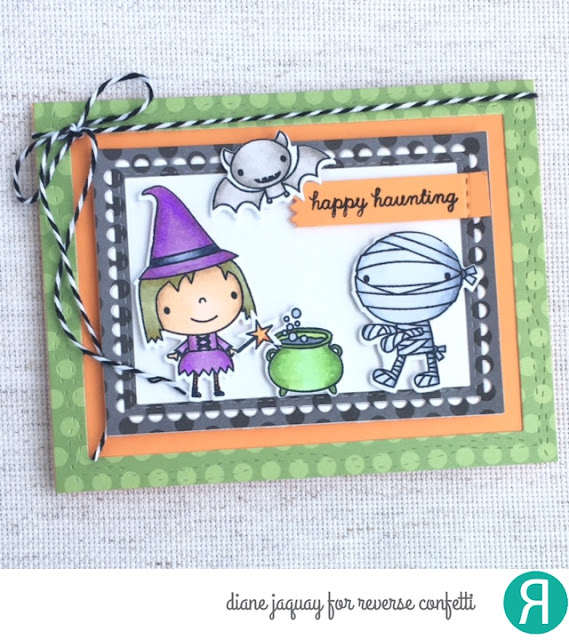 Aren't these little Halloween cuties just the sweetest?!!  To make my card I started by die cutting some frames using patterned paper from Fright Night, the 6x6 paper pad being released this month.  I cut the green polka dot frame using the wavy stitched border from All Framed Up Confetti Cuts, and the black polka dot frame was cut with the new Lacy Scallop Frames Confetti Cuts which are being released this month.  I added the frames to a piece of the new Tangerine Cardstock. 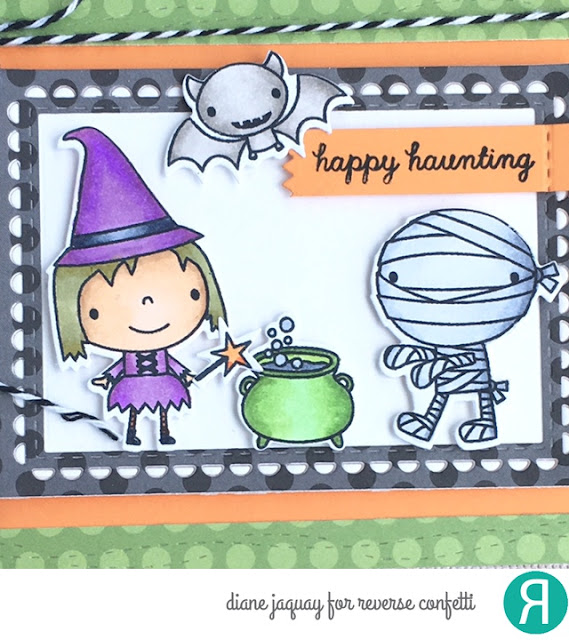 I stamped the images from Best Witches, colored them using Copic markers, and cut them out with Best Witches Confetti Cuts.  I popped them up with some foam dimensional tape.  I stamped the sentiment on Tangerine Cardstock and used dies from Edge Essentials Confetti Cuts to make the little stitch line and pinked edge.  To finish this card I added some Black & White Twine.


My next 2 cards use the new Treat Yo' Self sentiment set along with the coordinating Halloween Bits Confetti Cuts.  I have to admit I could not stop playing with these stamps and dies!  In addition to the 2 cards I have to share with you today I'll have another one to share for our blog hop on Thursday :) 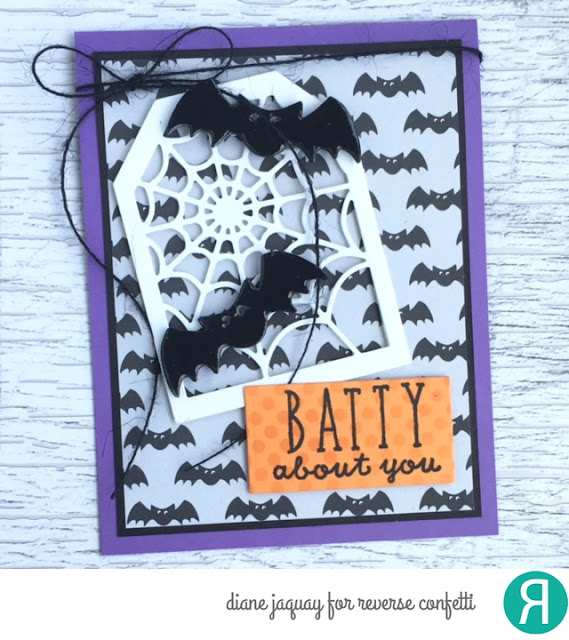 I started this card with a Grape Soda Cardstock base.  I trimmed a piece of the bat paper from the Fright Night 6x6 Patterned Paper Pad and placed it on some black cardstock.  I cut the tag from White Cloud Cardstock using the new Web Tag Layer Confetti Cuts.  LOVE this tag, so fun for Halloween!  I cut 2 bats from black cardstock using Halloween Bits Confetti Cuts, and coated them with glossy accents.  I used the new Lotsa Dots Stencil for the background of my sentiment.  I simply cut a piece of Tangerine Cardstock and used Tangerine Die Ink and an ink blending tool to add the dots.  It's subtle but adds a bit extra to the sentiment.  The sentiment from Treat Yo' Self was stamped with black ink.  I tied a bit of black twine on my card to finish it.  Here's a close up of the shiny bats: 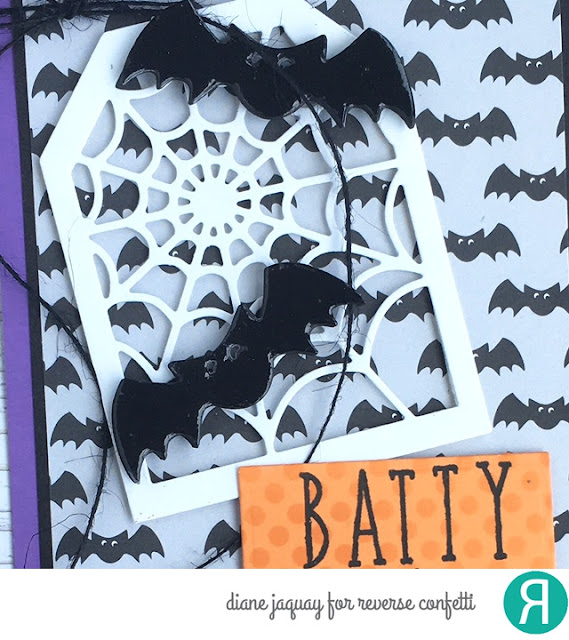 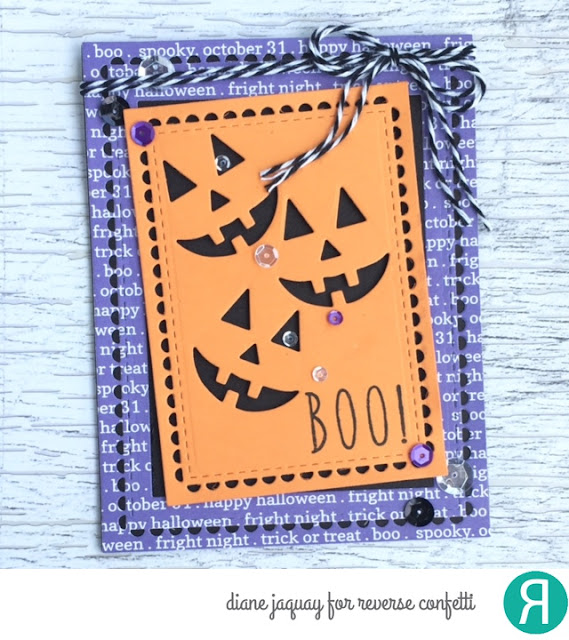 This next card starts with a black cardstock base to which I added a piece of patterned paper from the Fright Night 6x6 Patterned Paper Pad which I cut using the new Lacy Scallop Frames Confetti Cuts.  Next I used a smaller die from Lacy Scallop Frames Confetti Cuts and cut a piece of Tangerine Cardstock.  I used the pumpkin face die from Halloween Bits Confetti Cuts and cut it out 3 times from my tangerine piece.  I stamped the sentiment, "BOO!", from Treat Yo' Self, and placed the tangerine panel on a piece of black cardstock to better show off the spooky pumpkin faces. 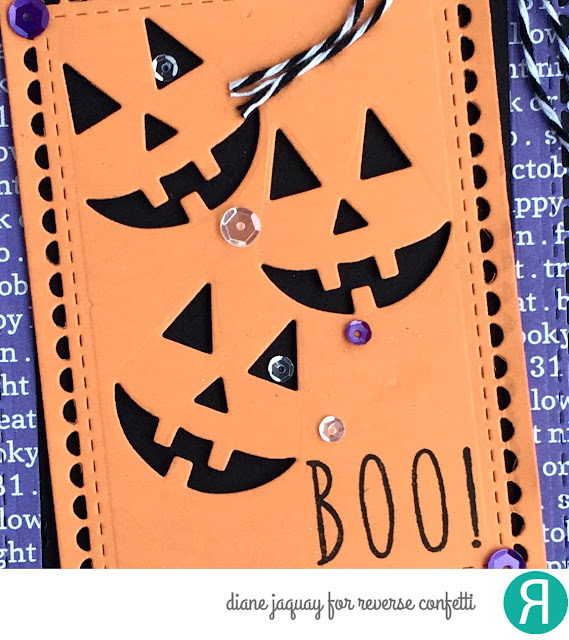 I added a few sequins and some of the Black & White Twine to finish my card. 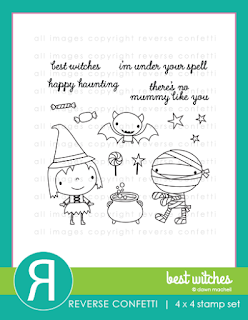 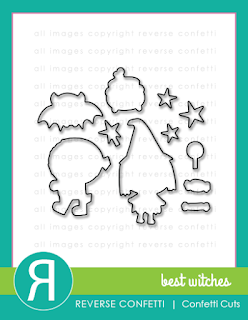 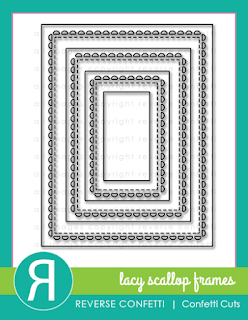 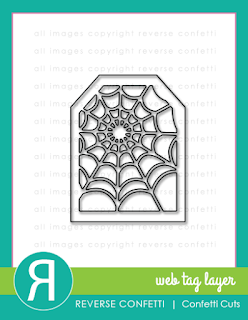 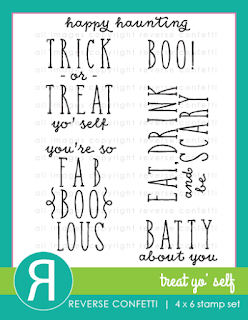 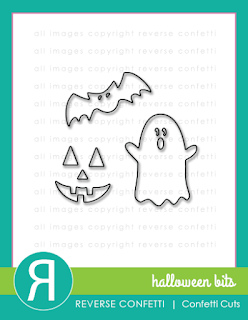 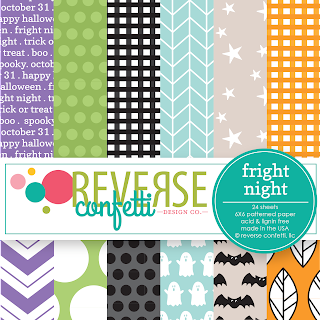 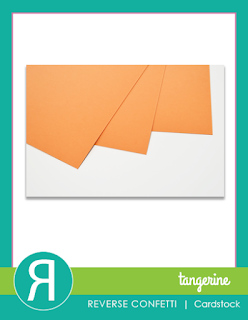 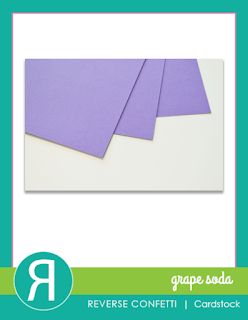 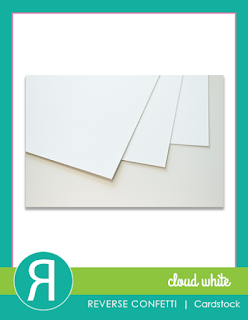 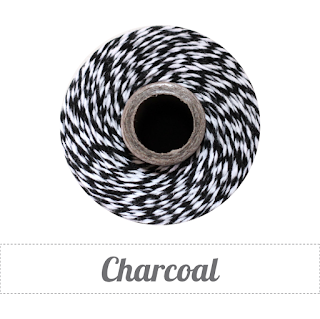